An anterior cruciate ligament (ACL) tear is one of the most common injuries among athletes. It is a serious knee injury which should be diagnosed as soon as possible after the incident. An optimal treatment by a knee specialist is essential so that the person concerned may resume sports activities as quickly as possible and lasting damages to the knee joint can be prevented.

What is the function of an anterior cruciate ligament (ACL)?

An anterior cruciate ligament (ACL) tear is one of the most common injuries among athletes. It is a serious knee injury which should be diagnosed as soon as possible after the incident. An optimal treatment by a knee specialist is essential so that the person concerned may resume sports activities as quickly as possible and lasting damages to the knee joint can be prevented.

What are the consequences of a cruciate ligament injury?

The knee becomes unstable due to a tear of the anterior cruciate ligament. If the knee is only moderately instable, problems may initially not be noticed and the injury may remain undiscovered for many years. However, a cruciate ligament tear may cause the knee to feel wobbly and even buckle repeatedly. As a further consequence of a cruciate ligament, injury, it often comes to a meniscus tear and cartilage damage. These damages can develop into serious degenerative arthritis also called osteoarthritis.

How is a cruciate ligament injury diagnosed?

An orthopedist specializing in knee injuries can accurately diagnose a torn anterior cruciate ligament by conduction a special examination (Lachman - pivot shift - test), during which he assesses the precise degree of mobility of the lower leg (tibia) relative to the upper leg (femur).
For example, the exact degree of knee instability can be determined by a special measuring apparatus (1000 Rollimeter, KT). Additional confirmation of a suspected anterior cruciate ligament is provided by magnetic resonance imaging (MRI), especially if additionally associated injuries such as a torn meniscus or cartilage damage is suspected. 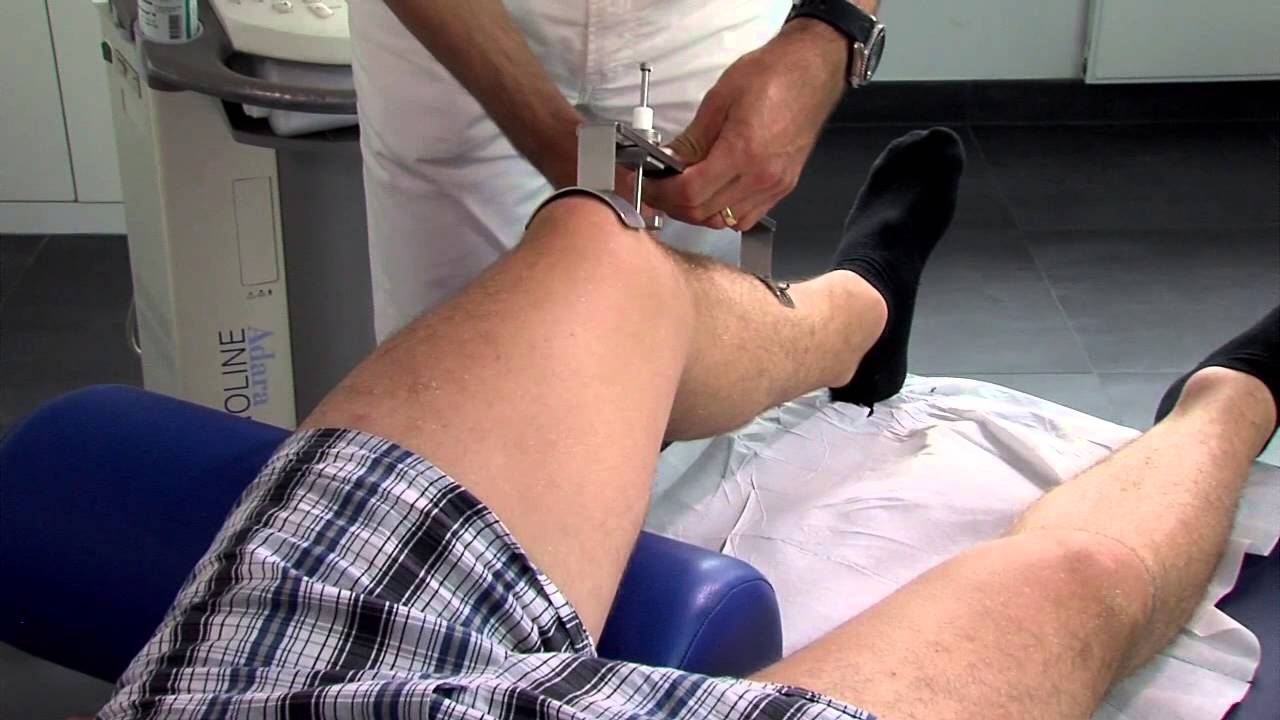 If a cruciate ligament injury is diagnosed, it is important to decide for the most optimal treatment. The following criteria will be decisive in determining the treatment:

Particularly in patients with a low level of physical activities, a surgery can often be avoided since in everyday life they experience hardly any symptoms, and the risk of early arthritis (degeneration of the joint) is rather minimal.

In the conservative treatment, the aim is to stabilize the knee joint muscular through appropriate strength and coordination training that strengthen the leg muscles. Especially in patients with a low physical and sporting aspiration level, surgery can often be avoided since they hardly feel symptoms in daily life and the risk of early osteoarthritis is not significantly high.

All patients with severe knee instability and higher levels of physical/sports activities should be urged to undergo surgery replacing the cruciate ligament, since otherwise there is a great risk of osteoarthritis.

The younger the patient the more important is it to opt for a cruciate ligament surgery. If associated injuries such as a torn meniscus or cartilage damage are present, surgical treatment is also recommended. The surgery usually entails replacing the missing anterior cruciate ligament with, endogenous tendon graft, i.e. strong replacement tissue. The objective of the surgery is to regain full stability of the knee after the healing phase.

Even if patients often opt for the surgical treatment, surgery should not take place as long as the knee joint is swollen, severe pain has not subsided, and the joint is not relatively mobile. In most cases this means surgery should take place two to three weeks after the accident or the injury has occurred. A prematurely performed surgery, may lead to joint stiffness after the operation. 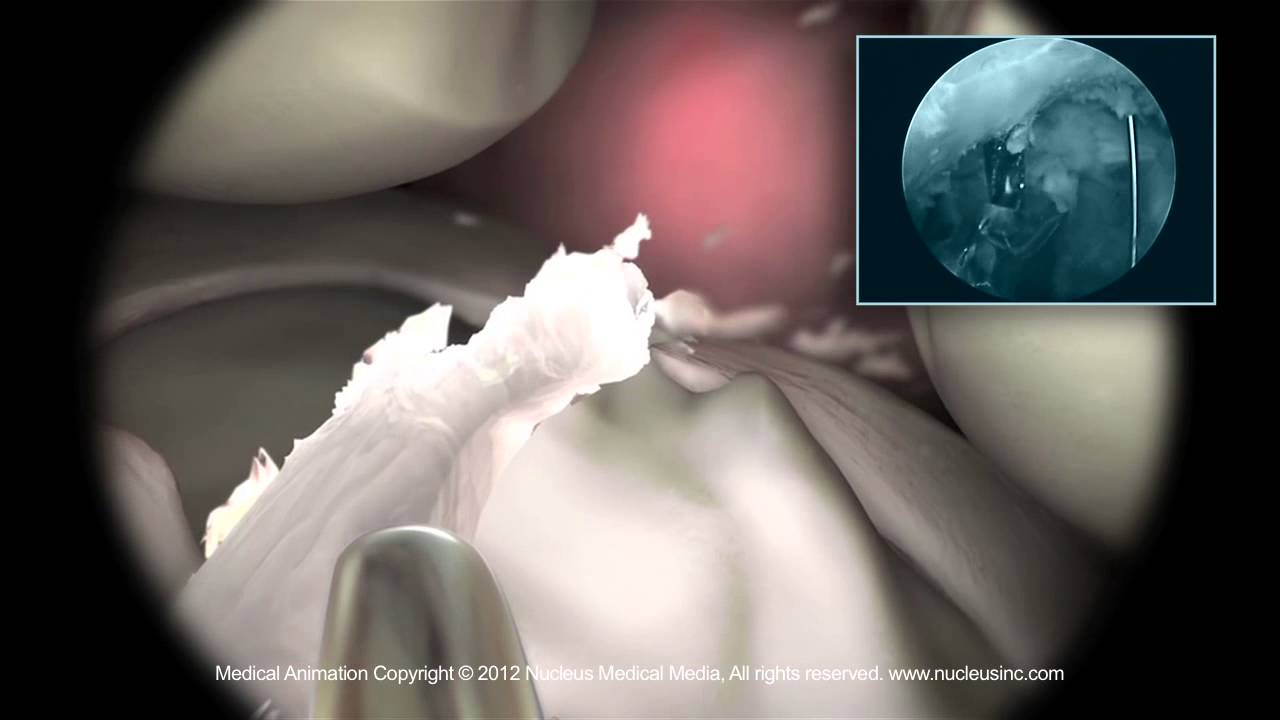 What are the procedures in a cruciate ligament tear surgery?

The surgery should be minimally invasive, i.e. performed by arthroskopy. This requires two or three incisions that are only a few millimeters in size for placing a mini camera and small surgical instruments. As an implant, the surgeon uses either two tendons from the inside of the thigh (semitendinosus and gracilis tendon) or a part of the knee extensor tendon (patellar tendon or quadriceps).

The respective tendon graft is extracted via a small, 3 cm long incision. After appropriate preparation, the tendon graft is then threaded through tunnels drilled into the lower leg and the thigh bone respectively. It it fitted precisely into the knee joint and then fixated to the bone. It is secured with screw-type implants, so-called interference screws, which consist of a bioabsorbable material or plastic. Alternatively, the fixation can be done with small titanium plates (endobutton) or a cross pin. In the context of the healing process, the graft grows in the bone and takes over the function of the cruciate ligament.

What is a Double Bundle Technique?

To restore the anatomy and function of the natural anterior cruciate ligament in a surgery as accurately as possible, currently it is being discussed whether the tendon graft should be performed as a single-bundle or double-bundle technique. This means that the tendon graft involves drilling two tunnels, instead of one into the lower leg and thigh bone. So far this complicated two-bundle technique (double bundle) does not seems have any compelling advantages over the one-bundle technique.

What type of anesthesia is needed for a knee joint cruciate ligament surgery?

Most of the approximately 1 to 1.5 hours cruciate ligament surgeries are performed with general anesthesia. Due to the medical, technical and pharmacological progress made in recent years, general anesthesia is well tolerated.

General anesthesia is often combined with a local anesthetics of the nerves that supply the knee joint. That means that even less medication is needed for general anesthesia and that it is even better tolerated. However, such a decision should only be made on a case to case basis after an appropriate examination of the patient individually decided by the anesthetist. The post-operative pain are due to improved anesthetic procedures and appropriate pain medication usually is not very strong.

What complications are possibly after an anterior cruciate ligament surgery?

Common surgical risks are wound healing, infection of the joint or a thrombosis in the leg.

Even if all possible safety measures are met, these risks can generally not be excluded completely, however, ultimately the risk is very slight. Specific complications associated with the surgery are a residual instability of the knee or a restriction of movement, meaning a lack of full extension or flexion of the knee joint. The risks are reduced if a cruciate ligament specialist performs the operation.

What about post operative care after a cruciate ligament surgery?

By using modern, minimally invasive surgical techniques, the impairment and rehabilitation after cruciate ligament surgery is quite short.

Generally, the surgery requires a hospital stay of one to three nights.
An optimal healing process requires the active participation of the patient, and simultaneously a professional physiotherapy (physical therapy, lymphatic drainage, exercise therapy).

Following the general guide line for the post surgical treatment is strongly recommend, however, the plan may vary depending on the decision of the surgeon and patient:

For an optimal treatment of a cruciate ligament tear/rupture, the knee experts at the Klinik am Ring are particularly well-qualified. Stefan Preis, M.D. and Jörg Schroeder, M.D., senior physicians at the Practice and Department of Orthopedics and Sports Traumatology at the Klinik am Ring in Cologne, specialize together with their team in the treatment of knee and shoulder disorders. In 2004, they founded the WEST GERMAN SHOULDER KNEE & CENTER, Cologne. The team consisting of eight specialists treats more than 10,000 patients per year. Annually they perform more than 1200 knee surgeries, of which are about 120 cruciate ligament surgeries