To understand conditions and injuries of the knee, it is essential to look at the joint’s structure, meaning the anatomy of the knee and the function of the important structures such as the meniscus, the cruciate ligament, and the cartilage. 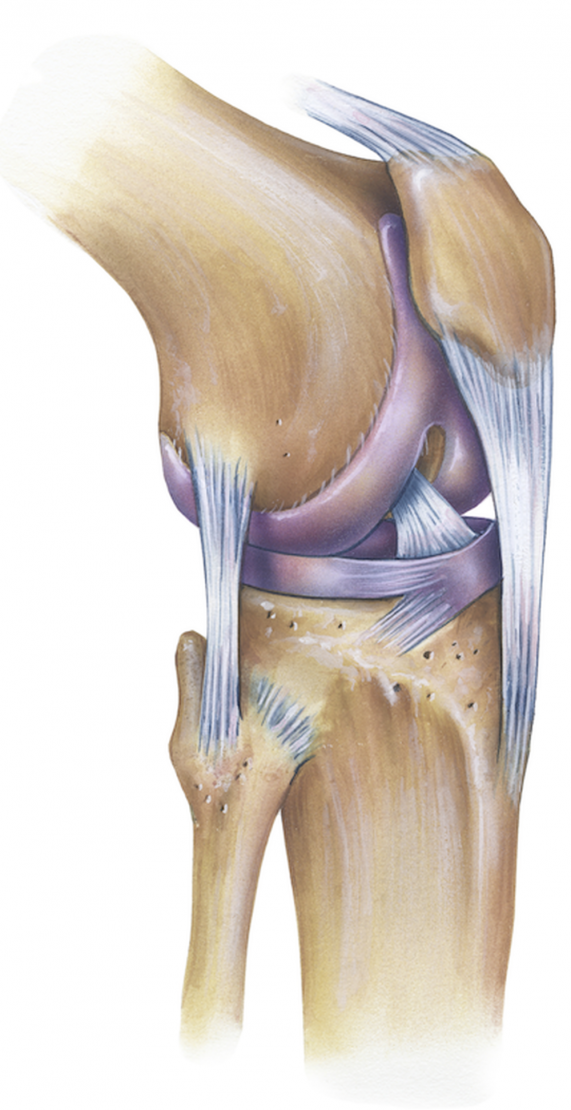 The knee joint is the articulation between the femur, tibia and patella. That the structure is somewhat complicated shows a look inside the joint: The contact points between the round end of the femur and the tibial plateau only consists two rounded condyles at the end of the femur, which, however, does not provide sufficient support. A complex apparatus of ligaments, tendons and buffers is needed to ensure a good mobility.

The knee ensures stability supporting the body weight; it allows for rotations and absorbs movements. The result is a complex construct, which is on the one hand quite capable of tolerating stress and carrying the body’s weight, but on the other hand is also vulnerable to injuries and wears and tears throughout life.

The main structures of the knee joint

The ends of the upper and lower leg bones are coated by a three to five millimeter thick layer of hyaline cartilage acting as a buffer. In conjunction with the synovial fluid, this layer permits a friction-free movement. The cartilage of adults has no blood supply; consequently, injuries do not heal by themselves. On the contrary, when an injury occurs, the cartilage damage increases and threatens to turn into osteoarthritis.

The internal (or medial) meniscus and the outside of the lateral meniscus function as buffers and are located between the upper and lower leg bones. The menisci are made of fibrocartilage.

In addition to the buffer function, the meniscus is responsible for an enlargement of the contact surface creating a better pressure distribution between upper and lower leg bones. A meniscus tear can be caused by an accident, but also normal strain and tear.

The cruciate ligaments extend into the depth of the knee joint and stabilize the lower leg forward or backward against the thigh and in rotation movements. A serious accident may cause a ligament injury. Depending on the severity of the injury, we differentiate between overstretching, partial tear or complete cruciate ligament tear (Torn ACL))

They are essential for the active movement of the knee. The muscles end in tendons and are additional connected with the bones. With tension, the muscles will shorten and the bones are moved in direction of the tension. Simultaneously, the muscle pull secures the joint in its position. As a result, chronic overuse can lead to tendon disorders, while severe stress or sudden movements can cause muscle injuries (patellar tendinitis / iliotibial band syndrome (ITBS) / runner's knee).

The patella is the bony part of the patellar tendon (patella tendon), which connects the large thigh muscle (M. quadriceps) to the tibia. With every more, the tibia slides over the fermur. On the back, it is coated with a thick layer of cartilage.

If cartilage surface is damaged, the damage becomes especially noticeable through pain when climbing stairs. Advanced cartilage damage is known as osteoarthritis.

Just like other joints, the knee joint is surrounded by a strong joint capsule. It is lined with mucous membrane. The membrane produces synovial fluid to provide nutrition to the cartilage and lubrication of the joint.

If an inflammation of the synovial membrane occurs, for example, caused by cartilage damage, the bursa produces more fluid, similar to the nasal mucosa in rhinitis. As a result, the knee swells and is painful. In addition to an anti-inflammatory therapy, if necessary, the condition should be treated with a medicinal cartilage therapy such as hyaluronic acid.

The knee joint is surrounded by numerous bursae (fluid sacs). They serve as buffers to minimize friction and facilitate movement between different sections of the joint. If an inflammation is present, the bursae increase, i.e. they swell, which can cause the appearance of the leg surface to change.