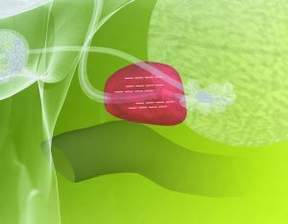 The LDR Brachytherapy or "Seed implantation" is a state-of-the-art radiotherapeutic procedure that is used in patients with a localized prostate carcinoma. Under constant ultrasound control, up to 80 short-radiating, ultra-small radiation sources (so-called "seeds") made of iodine are inserted into the prostate under full or partial anaesthesia. This is done with the help of puncture needles, which are placed at precisely predicted positions in the prostate via a coordinate target system. The seeds are deposited at the desired position in the prostate, where they remain in order to exert their radiation effect on the prostate carcinoma. The tumor tissue is destroyed from the inside by high-dose, targeted radiation.

Fewer side effects in seed implantation than in radical surgery

For the early stage of prostate cancer, seed implantation is an equally effective procedure for radical surgery, but it is much gentler on the patient. Incontinence is practically non-existent, impotence with 10-30 percent after three years is observed much less frequently than after surgery. Erectile dysfunction does not occur directly as in surgical removal of the prostate, but develops slowly.

According to current data from the Seattle Prostate Institute, the 15-year survival rate after seed implantation is 94 to 98 percent in low-risk patients and 89 to 97 percent in medium-risk patients. As demonstrated by the results of a long-term study on seed implantation conducted by the West German Prostate Center*, the biochemical absence of recurrence after 71 months of follow-up for patients with a low and medium risk profile was 97 and 94 percent, respectively. The results confirm long-term studies from leading European and US institutes. A comparable result was achieved by Potters and his colleagues (Potters et al.): Of a total of 733 patients, 84 percent had a PSA of < 0.5 ng/ml after 7 years. This means that seed implantation in localized tumors is considered to be an equally effective procedure for prostatectomy (Kupelian et al.), but is considerably gentler for the patient.

For whom is seed implantation not suitable?

Patients who have had a transurethral resection of the prostate within the last six months are not suitable.

After the urologist and radiotherapist have presented the indication for seed implantation, six to eight days before the operation, the "pre-planning" is carried out by means of transrectal ultrasound via the rectum. The resulting images are transmitted to a planning computer. Based on the size, shape and position of the prostate, the radiotherapist determines the number and position of the seeds.
Blood thinning drugs such as aspirin, ASA, Eliquis, Lixiana, Plavix, Xarelto or similar preparations must be discontinued one week before surgery. On the second day before the procedure, an antibiotic and an alpha blocker are taken in accordance with the doctor's prescription. The day before the procedure, food should be avoided that is difficult to digest. Do not eat or drink six hours before the procedure. The evening before the procedure, laxative measures are taken to empty the rectum.

In the "seed implantation" procedure, up to 80 short-radiating, very small seeds of iodine (so-called "seeds") are inserted into the prostate gland under constant ultrasound control under full or partial anaesthesia. This is done with the help of puncture needles, which are placed at precisely predicted positions in the prostate via a coordinate target system. The seeds are deposited at the desired position in the prostate, where they remain in order to exert their radiation effect on the prostate carcinoma. The tumor tissue is destroyed from the inside by high-dose, targeted radiation. Up until a few years ago, preliminary planning was carried out for seed implantation, culminating in a radiation plan that was calculated a few days to weeks before the seed was actually implanted. This method has been replaced by much more accurate online planning. The preliminary planning now only serves to order the number and activity of the seeds for the intervention date. The actual planning is carried out "online", i. e. the ultrasound images are only created during the anaesthesia of the patient, which form the basis for the individual irradiation plan of the individual patient. The desired positions of the seeds are permanently compared with the actual placement in the ultrasound image. Shifts in the beam pattern can therefore be corrected even more precisely. The precision of brachytherapy increases, which leads to an optimization of the treatment. The procedure lasts about 60 minutes. Since it is a minimally invasive procedure, this method is not a burden on the organism.

Approximately four weeks after the operation, a so-called rescheduling takes place. Computer tomography is used to check that the seeds are still at the originally planned positions. If necessary, corrections can be made at this time without any problems.
All further urological follow-up examinations such as the determination of the PSA value, an ultrasound examination as well as the determination of erectile function and micturition by means of standardized questionnaires are carried out quarterly. To be observed: Due to an inflammatory reaction of the prostate, a temporary increase in the PSA level may occur. The so-called PSA bounce is therefore not necessarily due to cancer progression, but can be triggered by the radiation effect on the prostate tissue. The increase in PSA occurs in about 44 percent of men (Critz et al., 2003).
Patients can normally resume their professional activities within a few days of surgery. At first, the patients should take physical care and pay attention to the following: During the first two weeks bathing, swimming, sauna visits, sexual activities and heavy lifting are forbidden. Compressive stress on the prostate and perineum, e. g. by cycling, riding or sitting on hard surfaces, should be avoided for about eight to twelve weeks.

The side effects of seed implantation are very low. Acute side effects usually only occur after 2-4 weeks and are characterized by a temporary irritation of the bladder and intestine. It can lead to increased stool frequency and discomfort when urinating. Some patients also report blood in the urine or ejaculate. However, severe bleeding is rarely observed. In the long term, 20-30% of patients suffer from erectile dysfunction, which requires drug therapy.
Seed implantation has been practised in the USA for more than 25 years and is used more frequently with 80,000 patients per year than surgical removal of the prostate. Due to the good cure rates with comparatively minor side effects, the method has now also established itself in Germany as a recognized method for the treatment of prostate cancer. For the early stage of prostate cancer, seed implantation is an equally effective procedure for radical surgery, but it is much gentler on the patient. According to the current guidelines (2014) of the German Society of Urology (DGU), patients suffer significantly less frequently from impaired potency* after seed implantation. Urinary incontinence, which is up to 50 percent* after radical removal of the prostate gland, is also negligible at 0.3 to 3 percent after seed implantation, and actually occurs only after a previous transurethral prostate resection (TURP). In addition to the healing rate, more and more experts are demanding that the treatment's side effects be taken into account more strongly than ever before.