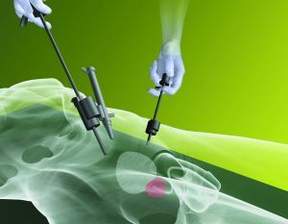 If the prostate carcinoma is organ-confined after all preliminary examinations, there is the possibility of surgical removal of the prostate gland in addition to local internal or external radiotherapy.

The long-term results of the operation in the early stages are equivalent to those of brachytherapy. Radical prostatectomy (removal of the prostate gland) can be performed with a abdominal incision, an episiotomy or laparoscopically as part of a laparoscopy. The choice of the procedure depends primarily on the surgeon's experience with the individual technique.

Unfortunately, the hope that robot-assisted surgery for the removal of the prostate (da-Vinci robot) would have enabled less incontinence, better potency rates due to nerve retention or shorter periods of hospitalization could not been proven in large international studies.

After removal of the prostate gland, the urethra is reconnected with the bladder so that urination can take place normally. However, unintentional loss of urine may occur after the operation - the sphincter muscle needs to be trained with pelvic floor exercises for several weeks. After radical surgery, 10 to 35% of all patients complain about water retention problems (urinary incontinence) and have to wear pads.

Further undesirable side effects are erectile dysfunction(impotency). It was tried to avoid this by preserving the corresponding nerves. Still even with less invasive techniques and so called minimal invasive approaches potency disorders occur in about 60-90% of those affected. After radical surgery, the patient should expect a hospital stay of 10 to 14 days and subsequent at least a 3-week follow-up treatment.