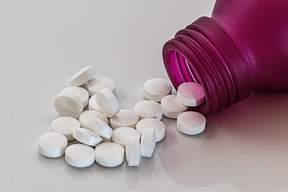 Testosterone, the male sex hormone, controls development and activity of the healthy prostate. Changes in the hormone distribution cause fluctuations and imbalances in the male hormone balance in old age. The result is a growth of benign but also the stimulation of malignant prostate cells.
Prostate cancer cells normally require male sex hormones (androgens), especially testosterone, to grow.

One of the most important pillars of prostate cancer therapy is based on this knowledge:

The inhibition of the testosterone effect on the prostate leads to a slowing of the growth of the prostate (cancer) cells and partly to cell death (apoptosis).

Although hormone therapy does not cure, 80 percent of patients can delay tumor growth for some time - often for years - and alleviate the symptoms.

GnRH agonists inhibit testosterone formation in the testicles. Possible side effects of hormone changes include hot flushes, sweating and a decrease in potency and performance. If the hormone treatment is temporary, the testosterone level can recover after discontinuing the medication.

Anti-androgens suppress the effect of testosterone by blocking its absorption into the cancer cell. There are two different classes of substances with similar effects: steroidal antiandrogens and non-steroidal antiandrogens. The latter have the advantage that they can maintain general performance, bone density and even potency. Anti-androgens are usually administered at the beginning of hormone treatment in conjunction with GnRH agonists over a few days to compensate for hormonal fluctuations.

Who can benefit from hormone therapy?

Whether and how long hormone treatment is aimed at depends on the tumor stage, the type of therapy, the size of the prostate, as well as the age, general condition and expected life expectancy of the patients. Hormone therapy is generally possible:

In high-risk patients (PSA >20ng/ml, Gleason-Score >6, removal margin after surgery not tumor-free, lymph nodes affected) hormone therapy is recommended over a certain period of time in order to keep the risk of recurrence as low as possible. The administration in combination with external irradiation or brachytherapy can also make sense.

In patients with advanced prostate carcinoma, which has already developed metastases in the bones or other organs, hormone therapy is usually used as a long-term treatment. Sole local treatment (surgery, radiation, brachytherapy) can no longer lead to cure in such cases.

Patients with a tumor recurrence

If a relapse occurs after radiotherapy or surgery, hormone treatment or a combination of hormone therapy with radiation therapy is the therapy of choice for many patients.

If an operation is too risky and radiotherapy is not possible or not desirable due to the side effects, hormone treatment can be considered. However, long-term healing cannot be achieved.

However, the effect of conventional hormone treatment is not permanent and the tumor cells become resistant to hormone deprivation after some time. One then speaks of a "castration-resistant" prostate carcinoma. In such cases, the active ingredient abiraterone (cytiga) can be administered. It inhibits hormone production not only in the testicles, but also in the adrenal glands and in the tumour itself. This deprives the prostate carcinoma of the breeding ground for further growth.