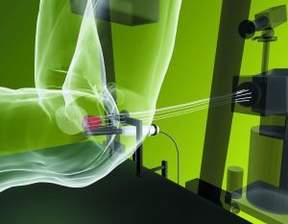 Afterloading is the most effective and gentle treatment for advanced or aggressive prostate cancer.

In the after-loading therapy, a high-dose radiation source is briefly introduced into the prostate gland. This proven treatment method is based on a remote controlled "recharging" of the iridium radiation source in puncture needles inserted under ultrasound control. At precisely calculated points, the dose delivery is focused for a certain period of time. This achieves an optimal dose distribution.

Depending on the findings, this treatment is carried out 3 to 4 times under a short anaesthesia at intervals of 1 week.

The most effective and sensible treatment for advanced or aggressive prostate cancer is HDR afterloading combined with external radiation. The advantage of HDR afterloading therapy over external radiation alone is that the targeted irradiation of the prostate can achieve a maximum dose increase while simultaneously reducing the radiation dose to the surrounding risk organs, especially the rectum and bladder. Complications and stress for the patient are greatly reduced as a result.

Combined afterloading therapy is particularly effective in localised advanced prostate carcinomas without distant metastases, as it involves a large area of safety around the prostate and at the same time includes neighbouring lymph nodes. Because of this large security area, she's superior to surgery.

Who is Afterloading suitable for?

Suitable patients for afterloading therapy in combination with external radiotherapy are risk patients with a locally advanced prostate carcinoma without distant metastases in bones and lymph nodes (T2b and/or PSA >10 and/or Gleason score >7). Numerous studies have confirmed that the cure rate of combination therapy is clearly superior to surgical removal of the prostate gland, with little change in quality of life. In a recent study of the West German Prostate Center, it was shown that combined radiotherapy in patients with advanced prostate cancer leads to an excellent healing rate and at the same time does not impair the patients' quality of life. In addition, the incontinence (< 1-3%) and impotence rates (20 - 40%) are significantly lower than after surgical removal of the prostate gland. A further plus point: the patients are able to resume professional and private activities after only a few days. HDR brachytherapy is a small, gentle procedure, which is usually carried out on a short-term inpatient basis and represents only a small burden for the patient.

After the urologist and radiotherapist have provided the indication for afterloading therapy, six to eight days before the operation the "pre-planning" is carried out by means of transrectal ultrasound via the rectum. The resulting images are transmitted to a planning computer. Based on the size, shape and position of the prostate, the radiotherapist calculates the feasibility of afterloading therapy.
Blood thinning drugs such as aspirin, ASA, Eliquis, Lixiana, Plavix, Xarelto or similar preparations must be discontinued in consultation with the treating physician one week before surgery. On the second day before the procedure, an antibiotic and an alpha blocker are taken in accordance with the doctor's prescription. The day before the procedure, food should be avoided that is difficult to digest. Do not eat or drink six hours before the procedure. The evening before the procedure, laxative measures are taken to empty the rectum.

Intestine coming. After external irradiation, some patients complain about fatigue. The side effects usually disappear automatically after the end of treatment. Immediately after the procedure, frequent urination occurs in many patients. This is due to irritation caused by the insertion of the catheter.

In cooperation with the radiotherapist, the urologist applies special hollow needles to the previously calculated positions in the patient's prostate under transrectal ultrasound control. This is done in a short anaesthetic. In a next step, ultrasound layer images are created for irradiation planning. Using a special computer program, the radiotherapist calculates the loading of the individual hollow needles with the iridium-192-source. The tiny radiation source can move in millimetre steps from any position of the needle and emit its radiation at the calculated stopping points over a defined period of time. A total of up to 200 possible breakpoints of the radiation source are defined.
After the irradiation plan and dose distribution have been completed, all needles are connected to the afterloading device by means of thin extension tubes. Then the actual irradiation takes place, i. e. the radiation source now moves needle by needle and irradiates the tumour on site. The needles are firmly fixed in the prostate, so that the target and risk organs do not change their position and distance to each other. The pure irradiation time lasts only a few minutes and the patient is in a special radiation protection bunker. As with seed implantation, urologists and radiotherapists can monitor the treatment in real time using state-of-the-art computer technology. The smallest deviations of the implant needles from the previously calculated irradiation plan are immediately taken into account and optimized accordingly. After the prostate gland has been completely irradiated, the needles can be removed and the patient can wake up from anaesthesia. The procedure usually takes 60 to 90 minutes. There is usually a break of one week between treatments. The additional external irradiation takes about 6 weeks. As a rule, a total of approx. 30 times up to a total dose of 50-55 Gy is irradiated five days a week.

Urological follow-up examinations, such as the determination of the PSA value, an ultrasound examination and the recording of side effects using standardized questionnaires, are carried out quarterly. Patients can normally resume their professional activities within a few days of surgery. At first, the patients should take physical care and pay attention to the following: During the first two weeks bathing, swimming, sauna visits, sexual activities and heavy lifting are forbidden. Compressive stress on the prostate and perineum, e. g. caused by cycling, riding or sitting on hard surfaces, should be avoided for about four weeks.

The side effects of HDR afterloading are minor. Since the afterloading procedure is usually combined with external irradiation, local irritation of the bladder and intestine can occur. After external irradiation, some patients complain about fatigue. The side effects usually disappear automatically after the end of treatment. Immediately after the procedure, frequent urination occurs in many patients. This is due to irritation caused by the insertion of the catheter.